Women in the Boardroom

The American Bankers Association is always seeking opportunities to lead or partner oncritical issues affecting the banking industry. This white paper, Women in the Boardroom,is an example of a collaboration between ABA and Bank On Women, Inc.

ABA thanks Bank On Women, Inc., for their critical work to expand gender diversity withinthe boardrooms and C-suites of community banks across the county.

Women represent more than half of the population, more than half of degree-holding employeesand they control the majority of the buying power in American households. Yet, they areconsistently under-represented on corporate boards and in C-suites. This trend extends to thefinancial industry where women are still struggling to find parity with men at the highest levels ofleadership (see Figure 1). While the financial sector has made positive steps in recent years, moreprogress is needed among financial institutions of all sizes to increase the diversity of their boardsof directors and senior management teams.

As of 2018 in the banking industry, women held just 40 CEO positions at U.S. public banks,representing only 4.31% of all bank CEOs. Despite several shareholder resolutions demandinggreater diversity in public company leadership, the number of women bank CEOs only grew bytwo people between 2013 and 2018. Additionally, most female CEOs lead banks with less than$1 billion in assets. 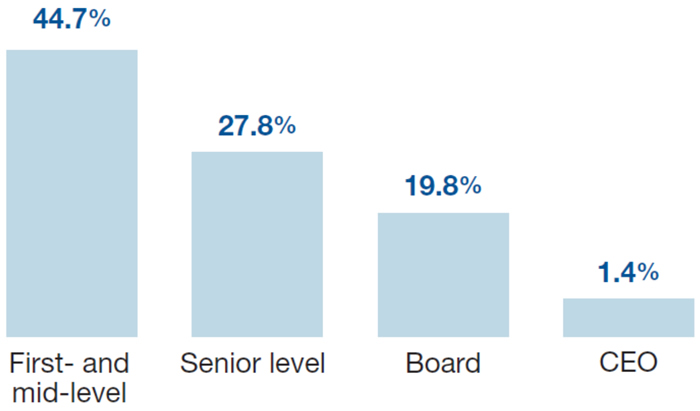 A variety of research has shown that while women and men enter the financial industry in roughlyequal numbers, the number of women shrinks by nearly half at the middle-management level.Having fewer women in middle-management roles or higher means that fewer qualified womenare available to later serve in senior leadership roles. Furthermore, according to a “Women in theWorkplace 2019” study by McKinsey & Co. and Leanin.org, women are less optimistic about theiropportunity to advance, and many feel steered into support roles or that they have been hired intoentry-level positions with limited upward mobility.

‘Board Diversity Trickles Down’

Studies have shown a positive correlation between the number of women on a company’s boardand the number of women holding senior positions at the company. According to the PetersonInstitute, the presence of women on boards correlates strongly and positively with the presenceof women in executive ranks. This correlation reinforces the necessity for banks to recruit womento their boards and into C-suite positions, and highlights the importance of creating a pipeline of female managers.

According to McKinsey & Co., companies with more than three women in senior management scorehigher on average across nine categories of organizational excellence than banks with no womenin senior management. Performance increases significantly once companies reach a critical mass(around 30%) of women in top leadership roles. Companies with a higher percentage of womenon their management committees are also the companies with the best performance. This researchdemonstrates the business case for professionally developing and then promoting women into themanagement talent pipeline at all levels.

More specifically, bank performance is positively correlated with having women in leadership roles.A Federal Reserve study found that banks perform better once they reach a critical level of boarddiversity. The relationship between bank performance and gender diversity becomes positive as theshare of women on the board increases:

The business case is clear that financial institutions should work toward building more diverse andinclusive boards and senior management teams. While a significant amount of progress is yet to bemade, banks can continue working to move more women into board director and senior leadershippositions by following these best practices:

As banks seek to recruit qualified talent, Bank on Women, Inc.—a nonprofit organization dedicatedto educating the community banking industry on the importance of adding women to the board andC-suite—is working to build a database of potential director candidates. This resource can assistrecruiters in developing diverse candidate slates for banks.

As banks work toward addressing the gender gap within their own institutions, it’s also a good ideato evaluate how they are serving women customers. Women are business owners and job creators.Women-owned businesses are growing at rates that far exceed male-owned businesses. This createsa lending opportunity for banks, especially since female business owners report that their greatestchallenges are lack of capital and cash flow.

Research suggests that growth in employment revenues begins to surge among women-ownedbusinesses when they reach $250,000 in revenues. Supporting businesses on the cusp of crossing thisthreshold or who have crossed it would accelerate the growth of larger women-owned businesses.On the consumer side, women make 85% of the consumer decisions in their households and providethe primary income for greater than 40% of U.S. households. This presents core deposit and feeincome opportunities for banks. And with a significant generational wealth transfer expected tooccur in the years ahead, wealth management fees create another income opportunity for banks.

In all, the potential for $700 billion in growth in deposit accounts from women represents asubstantial opportunity for banks to market their products and services to women and ensure thatthey have boards and senior management teams in place that understand the financial needs andchallenges of women consumers.