Condition of the FDIC Insurance Fund

The FDIC Deposit Insurance Fund balance reached a record $117.9 billion in December 2020. Growth in the fund balance in 2020 reflected $7.1 billion in assessments paid by banks and $2.1 billion in interest and gains on the fund’s portfolio of Treasury securities. Four banks failed during this period.

Despite growth of the fund, the “reserve ratio” of the fund to insured deposits declined to 1.29 percent. The decline was due to the largest-ever surge in insured deposits (excluding when deposit insurance coverage limits were increased in 2009 and 2010). 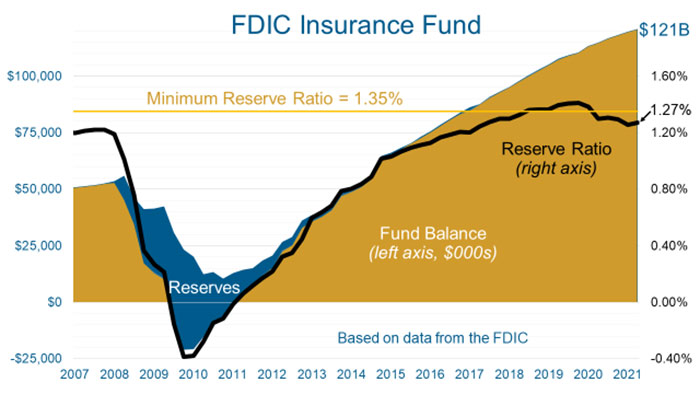 Since the insurance fund’s reserve ratio fell below the statutory minimum of 1.35 percent, the FDIC is required under 12 U.S.C. 1817(b)(3)(E) to implement a restoration plan to restore the reserve ratio to that level within eight years. This would involve higher assessments for a period.

However, since the decline was due to the unprecedented surge in deposits, not bank failures and insurance losses, the FDIC Board elected last September to hold off on raising assessments in anticipation that the surge will reverse and bring the fund reserve ratio back above 1.35 percent in the foreseeable future.

As recommended by ABA, in June 2020 the FDIC adopted a rule to mitigate the impact on deposit insurance assessment from lending under the Paycheck Protection Program (PPP) of the Small Business Administration (SBA). This rule went into effect for second quarter 2020 assessments, to be billed and paid in September.