Ninety-nine percent of consumers rated their bank’s online and mobile app experience as “excellent,” “very good,” or “good,”—tying last year’s record mark—according to a national survey conducted by Morning Consult on behalf of the American Bankers Association. In addition, 81% of those surveyed said innovation and technological improvements by banks are making it easier for all Americans to access financial services, an acknowledgment of the role technology is playing in promoting financial inclusion. A majority (54%) said they have been more likely to use a contactless payment solution (such as credit or debit cards, smart phone or mobile apps, virtual wallets, etc.) during the COVID-19 pandemic. 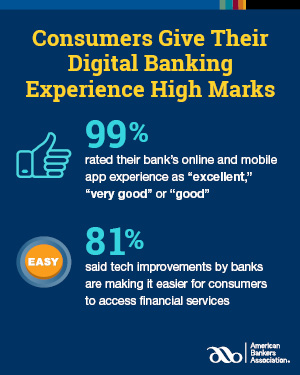 “Digital banking adoption has skyrocketed since the pandemic and consumers are clearly liking what they’re seeing,” said Rob Morgan, ABA’s senior vice president of innovation strategy. “These survey results show that consumers enjoy the convenience, speed and security of digital banking, and they are likely to continue using these channels even after the pandemic subsides. Banks have invested heavily in cutting-edge technology that has helped make financial services even more accessible across the country.”

ABA also released an accompanying infographic highlighting the survey results. The data released today is the latest in a series of results gauging U.S. consumers’ preferences and opinions regarding banks and their services. ABA recently released survey data revealing consumers’ preferred banking methods, and that Americans are highly satisfied with their bank and trust banks most to keep their information safe. The full results for today’s survey questions are as follows:

When asked “On a scale of 1-5, where “5” is excellent and “1” is poor, how would you rate your primary bank’s online and mobile app experience?” respondents who have a bank account provided the following responses:

When asked “Thinking about your actions during the COVID-19 pandemic, have you been more or less likely to use a contactless payment solution (such as credit or debit cards, smart phone or mobile apps, virtual wallets, etc.) when making a purchase?” consumers provided the following responses:

When asked “In the past month, how often have you used a mobile device, such as a smartphone or tablet, to access and manage your bank accounts, such as check balances, deposits or bill payments?” consumers provided the following responses:

Younger adults were more likely to use a mobile device at least once to manage their accounts:

When asked “In the past 12 months, have you used a mobile app on your phone or tablet, such as Apple Pay, Zelle or Venmo, to make a payment or transfer money to family or friends?” consumers provided the following answers:

Younger adults were more likely to use mobile payment apps:

When asked “Which of the following mobile apps have you used to make a payment or transfer funds?” mobile payment users selected the following apps:

The American Bankers Association is the voice of the nation’s $23.7 trillion banking industry, which is composed of small, regional and large banks that together employ more than 2 million people, safeguard $19.7 trillion in deposits and extend $11.2 trillion in loans.