Nine in 10 Americans with a bank account (88%) say they are “very satisfied” or “satisfied” with their primary bank, and 97% rate their bank’s customer service as “excellent,” “very good” or “good,” according to a new survey conducted by Morning Consult on behalf of the American Bankers Association. The survey, conducted earlier this month and unveiled today during ABA’s Annual Convention, also found that 3 in 4 U.S. adults are “very satisfied” or “satisfied” with their bank’s response to COVID-19. According to the survey, 81% of those surveyed said innovation and technological improvements by banks are making it easier for all Americans to access financial services. 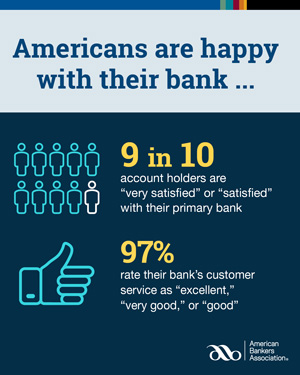 “Banks have worked hard to provide exceptional service and assistance to customers during the pandemic, and this survey shows that those efforts are appreciated,” said Rob Nichols, ABA president and CEO. “It also demonstrates the trust consumers have in America’s banks to provide convenient and secure financial services. Thanks to our industry's commitment to innovation, customers know they can manage their money anytime from anywhere while having the peace of mind that their information is protected.”

The survey also found that U.S. adults in all age groups trust banks more than any other entity – including healthcare providers, non-bank payment providers and the government – to keep their information secure and private. Additionally, three-quarters of consumers (72%) prefer that the company that handles their finances is regulated like a bank, while only 11% say they don’t care. A majority in every age group surveyed shared that view. If given a choice, a large majority of consumers (67%) prefer that banks deliver their banking services in the future as opposed to the federal government (7%) or a provider that is neither a bank nor the federal government (10%).

ABA also released an accompanying infographic highlighting the survey results. The data released today are the first in a series of results gauging consumers’ preferences and opinions regarding banks and their services. ABA will release more results from the Morning Consult survey in the weeks ahead. The full results for the survey questions released today are as follows:

When asked “On a scale of 1-5, where 5 is very satisfied and 1 is very dissatisfied, how satisfied are you with your primary bank?” respondents who have a bank account provided the following responses:

When asked “On a scale of 1-5, where 5 is excellent and 1 is poor, how would you rate your primary bank’s customer service?” those with a bank account provided the following responses:

When asked “On a scale of 1-5, where ’5’ is very satisfied and ’1’ is very dissatisfied, how satisfied have you been with your bank’s response to the COVID-19 pandemic?” consumers provided the following answers:

When asked “In your opinion, if you had a choice, which of the following would you prefer deliver your banking services in the future?” consumers provided the following answers: